Pekanbaru, 3 July 2021 – Minister of Tourism and Creative Economy (Menparekraf) Sandiaga Salahuddin Uno has inaugurated the Riau Malay Cultural and Creative Economy Center. Joining virtually, the Pekanbaru-born minister really appreciates the presence of facilities that are expected to contribute to the preservation of cultural Malays treasures and support the development of the creative economy in Riau.

"The presence of this center should be an encouragement for the revival of Riau's creative economy in Indonesia in the middle of this pandemic," said Minister Sandiaga Uno when giving his speech in the inauguration ceremony which took place on Saturday, July 3, 2021. The Minister of Tourism and Creative Economy also expected the creative economy sector in Riau continues to be developed, in addition to tourism. In addition, as Indonesia has a demographic bonus of the younger generation. During the pandemic, according to Sandiaga Uno, we all must innovate, adapt, and collaborate. 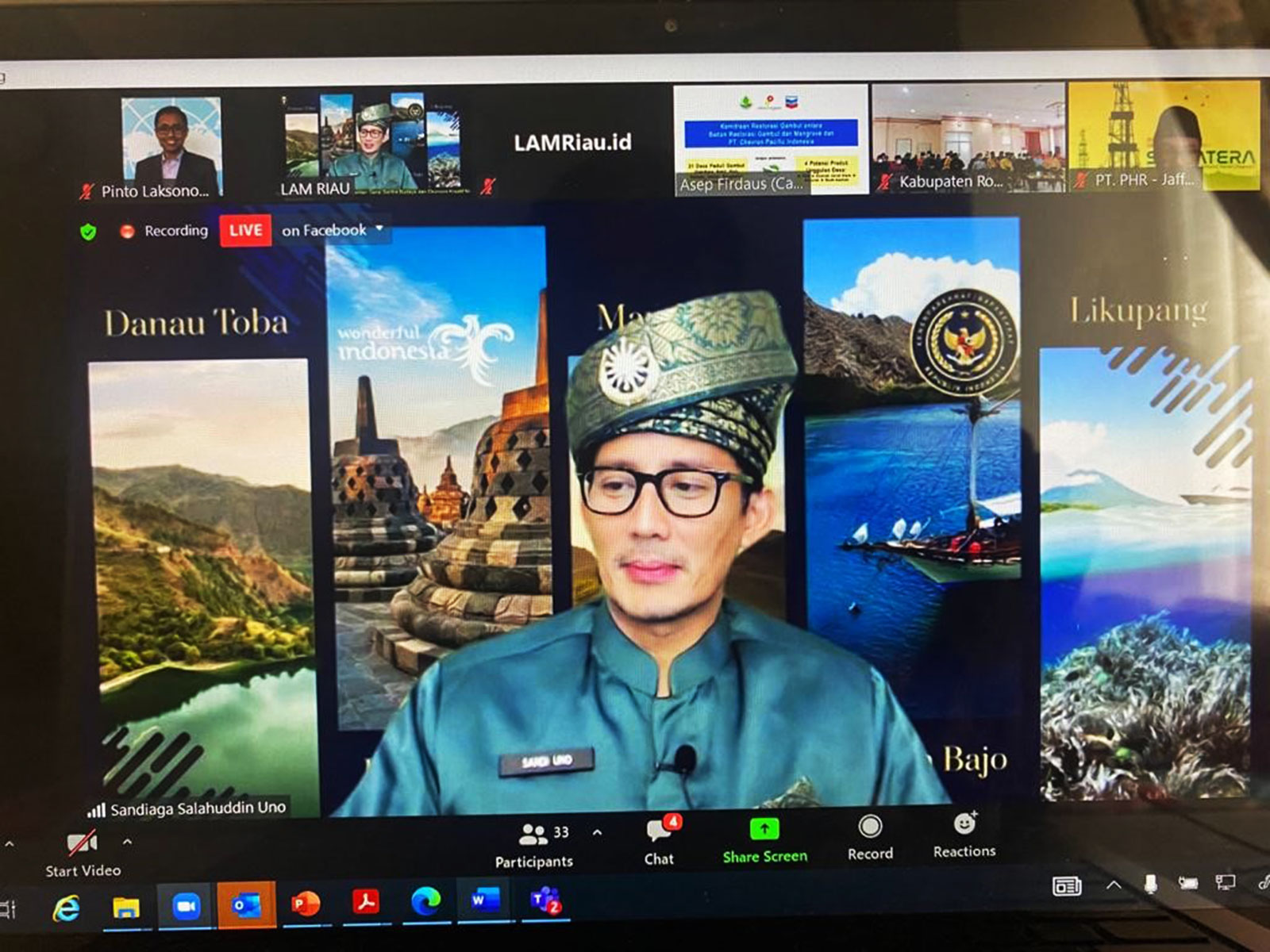 The center for the development of culture and creative economy for Micro, Small and Medium Enterprises (MSMEs) based on Malay culture, is located in the Malay Traditional Institution Building complex Riau (LAMR), Jalan Diponegoro 39, Pekanbaru. The building size are 10 x 36 meters. Inside the building are integrated stalls to showcase handicrafts and special food from 12 regencies/cities in Riau. Each district/city can also regularly perform Malay arts and culture at the location.

The development of the Riau Malay Creative Economy and Culture Center was funded by SKK Migas – PT. Chevron Pacific Indonesia (PT CPI) through a cost recovery scheme. “This facility can be a kind of display for the richness of arts and culture and products of SMEs typical of Riau Malay, at the same time encourage the preservation of the noble Riau Malay cultural treasures,” said Managing Director of Chevron IBU & President Director of PT CPI Albert Simanjuntak. He expects local government support to promote this center as one of the destinations “must-visit” for tourists who come to Riau. "So that management can be sustainable."

The Riau Provincial Government appreciates the presence of this center. "We hope that the Minister will took the time to come to Riau to help promote Riau's creative economy with its rich cultural treasures," said Riau Governor Syamsuar.

“This center is a legacy and the most beautiful commemoration for PT CPI, which has been operating in Riau for almost a century. This center has become a memory of PT CPI the company that participated in building infrastructure and human resources in Riau," said the Chairperson General LAMR Daily Executive Board Datuk Seri Syahril Abubakar.

SKK Migas - PT CPI partnership with LAMR and Riau Provincial Government in developing this Center for Culture and Creative Economy has strategic value for the preservation of Malay culture and the development of the creative economy in Riau. The presence of this center is expected to further encourage the creativity of SMEs as well as practitioners of Malay arts and culture.

LAMR and PT CPI have formed a committee tasked with ensuring the continuity of activities so that the Center for Culture and Creative Economy is always interesting to visit. The committee, consisting of LAMR representatives and stakeholders related interests, will develop plan of regular activities. Every month there will be one district/city appointed to perform the cultural and artistic events.

The presence of the Center for Culture and Creative Economy also strengthens long-term partnerships SKK Migas - PT CPI with the people of Riau which has been running for almost a century. SKK Migas - PT CPI has become an inseparable part of the history of regional development as well as the socio-economic conditions of the Riau people.

This facility will also be one of PT CPI's legacy which will end its operating contract in the Rokan Working Area on August 8th. Examples of other facilities that SKK Migas – PT CPI were built including the Migas Center at UIR, SKK Migas – Chevron Corner at the Sang Nila Utama Museum to be the center for learning about the upstream oil and gas industry.

Other facilities that have been built for in the past including the Siak I Bridge, SMA Negeri 1 Pekanbaru (Pekanbaru 1 High School), Pekanbaru Tribuana Sports Center, and many others.